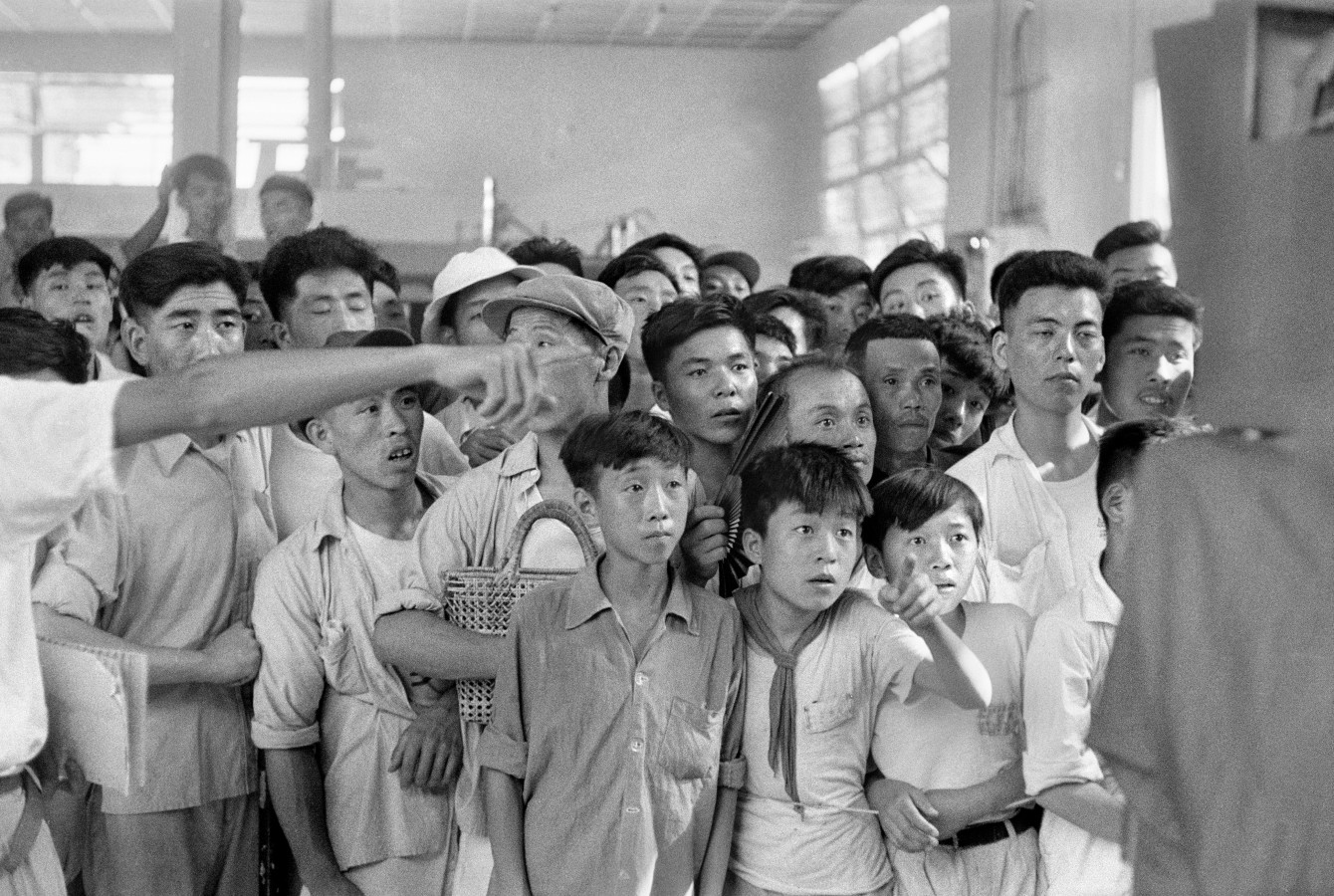 Original Caption: These youngsters are seeing television for the first time. Such items were displayed to show the crowds the possibilities of the future, because for the moment Mao Tse-tung is calling for a life of hardship and frugality to build “a thousand years of happiness." 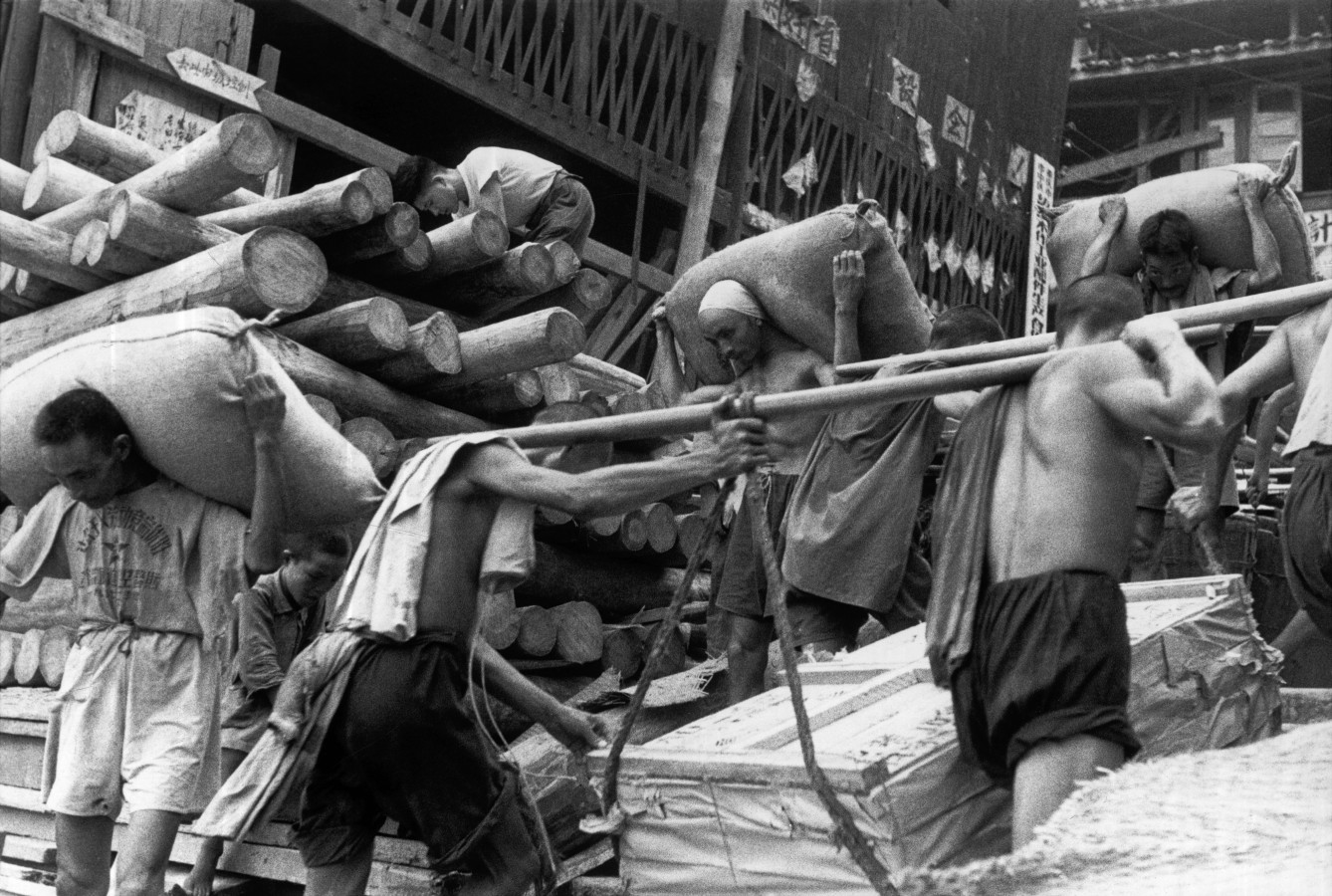 Original Caption: Mechanized equipment replaces coolies for much of the unloading on Shanghai’s docks, but in Chungking on the Yangtze River, men still have to do the heavy labor. 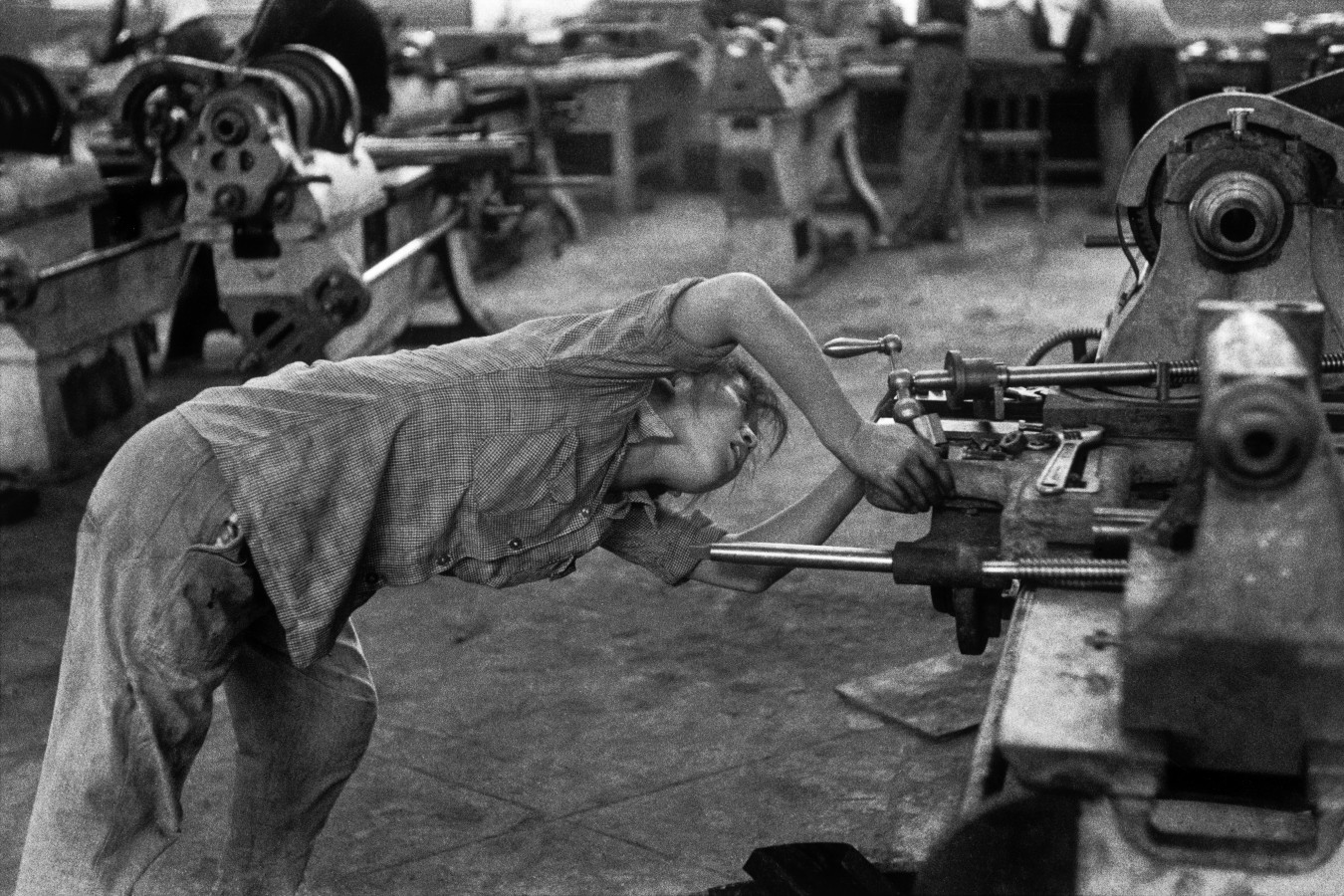 Original Caption: Work study programs are an integral part of China’s student life. In Shenyang’s engineering school, constructed in 1950, the girl at this lathe and six thousand other students study and produce for five years under eighty teachers. Lack of scientists, engineers and technicians is one of Mao Tse-tung’s toughest problems in pushing ahead on the industrialization of the land. 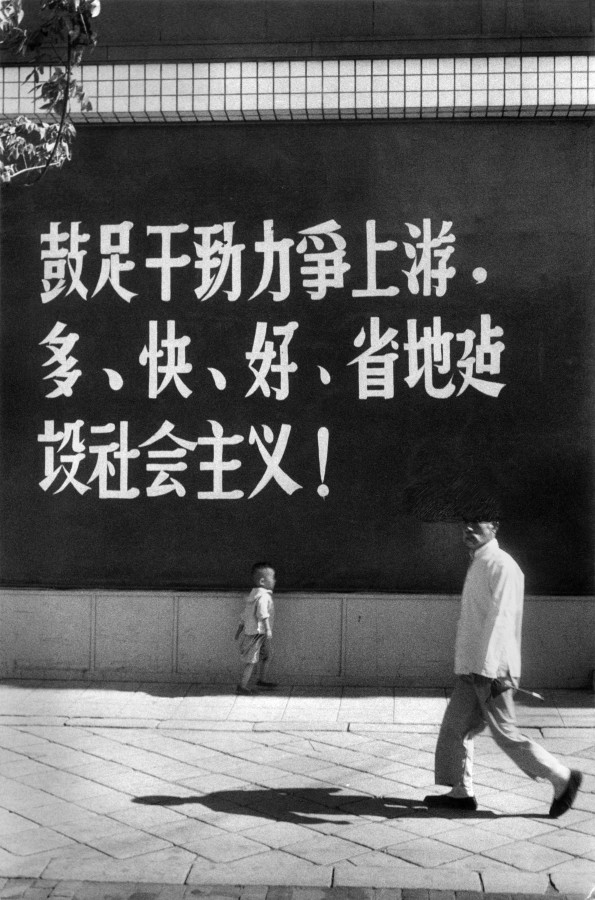 Original Caption: In large characters, Shenyang’s citizens are encouraged to overcome difficulties, to produce “still bigger, still better, more quickly, more frugally.” This is the slogan most often seen throughout the country and can be called the slogan of 1958. Other slogans: “Work like the devil for three years to change the face of China in most of the regions,” launched by Mao Tse-tung. Another, by Liu Chao-Chi: “Several years of hard life, a thousand years of happiness.” In contrast, the slogan of 1956 was, “Make it big and quickly, do it well, do it cheaply.” 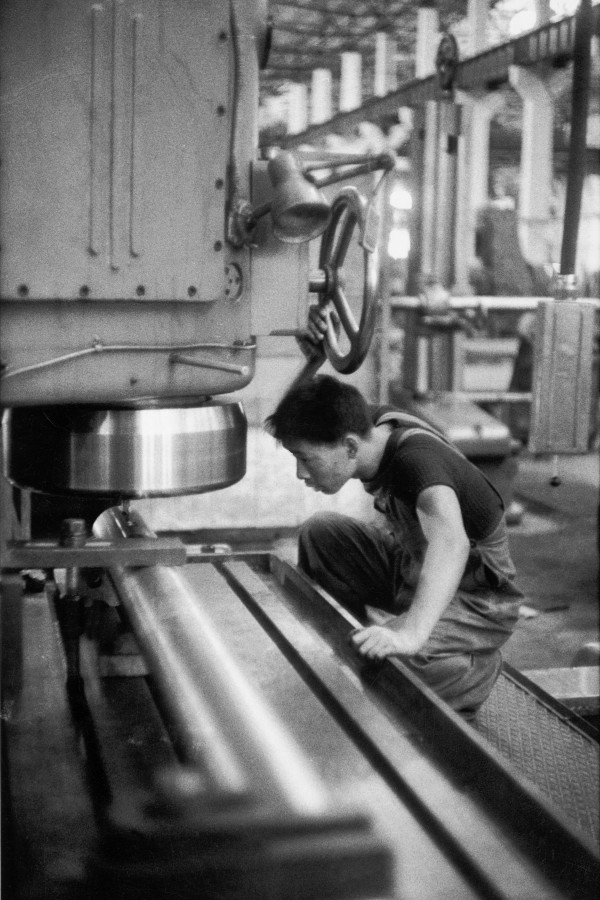 Original Caption: At Wuhan’s heavy-tooling factory, one of its four thousand workers runs a milling machine. Here, 80 percent of the machinery is Chinese-made, 20 percent Czech or East German. Construction of the factory started in 1956 and will be finished in 1959. 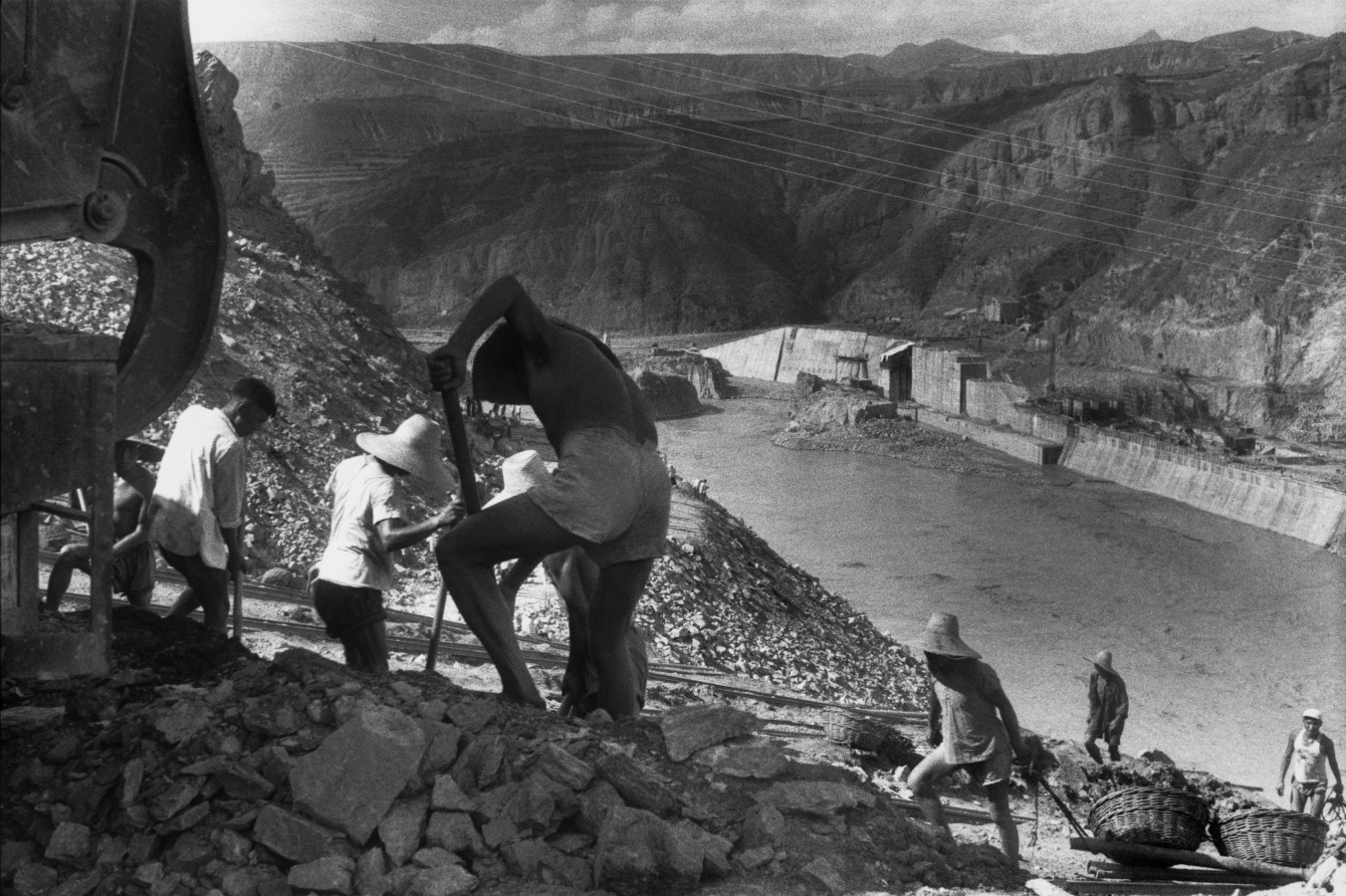 Original Caption: Workers breaking stones on the Sanmenshia Dam by the Yellow River. The project employs seven thousand workers as well as volunteers. Started in 1957, it now provides irrigation for miles around. 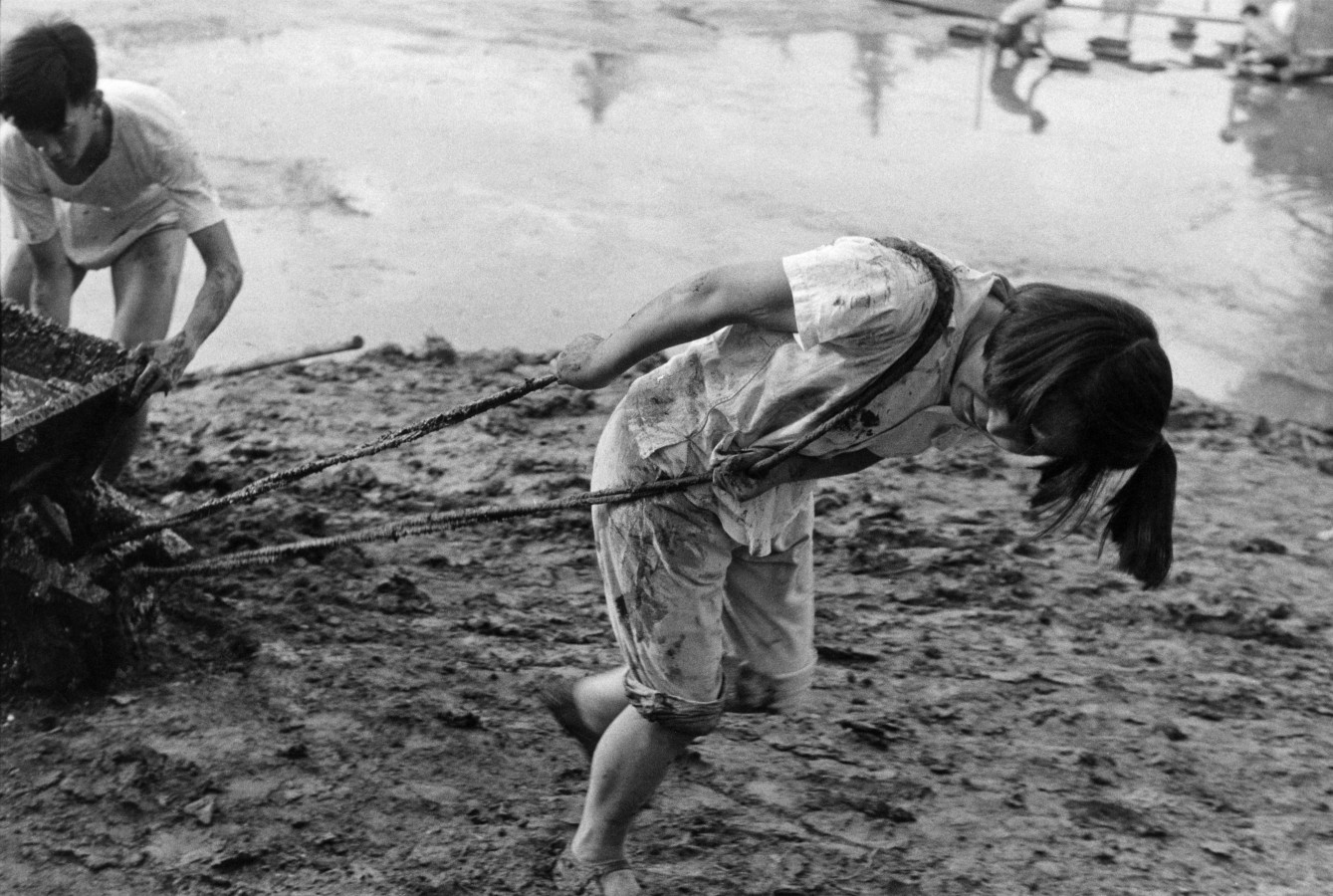 Original Caption: Instead of waiting for a swimming pool, Beijing University students improvised by plunging into this muddy pond. According to its director, the student body of this sixty-year-old university was “one of the seeds that bred the revolution.” He refers to demonstrations by three thousand youngsters on May 4, 1919, against the provision of the Treaty of Versailles that gave Japan privileges formerly held by Germany. 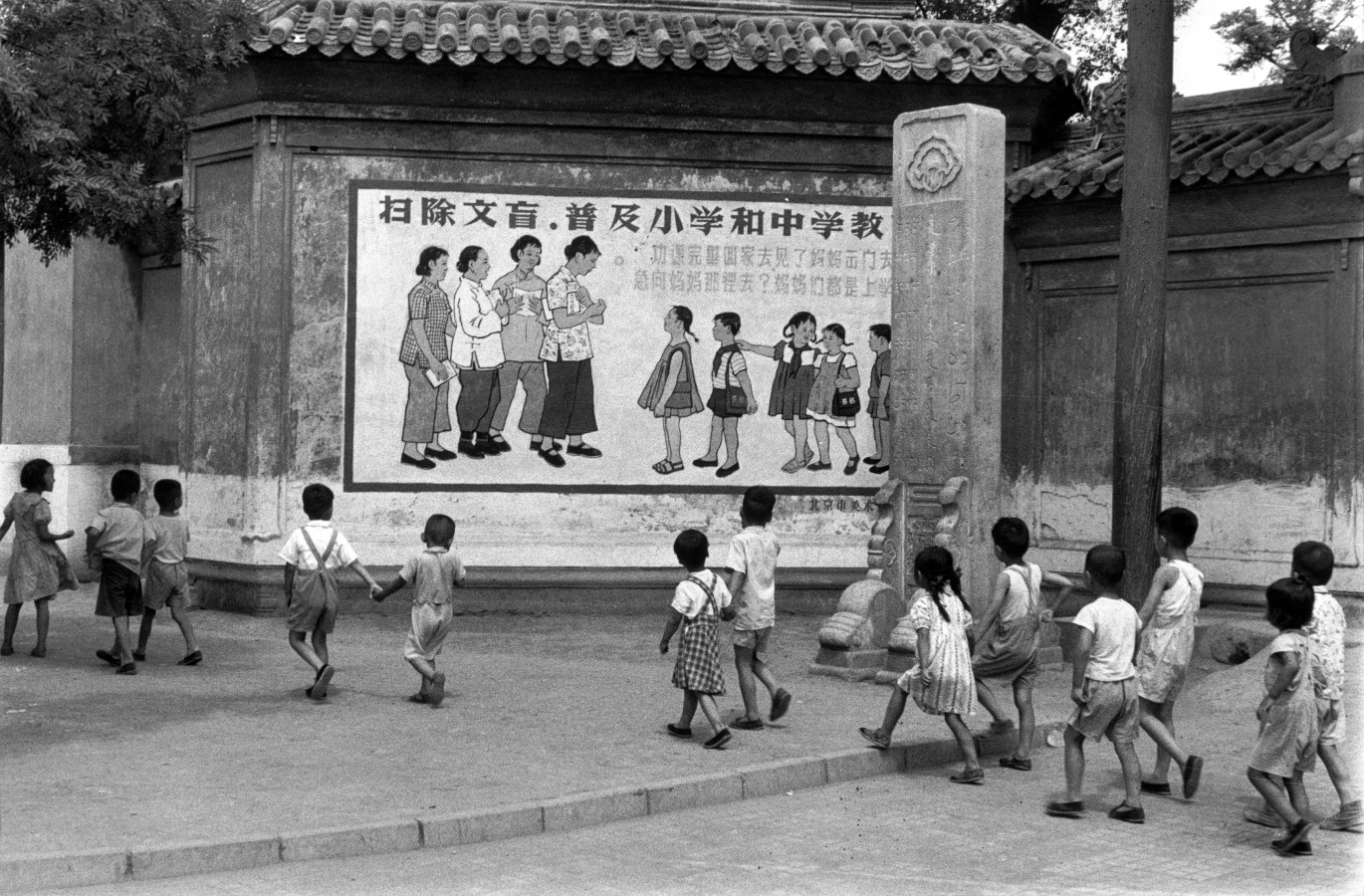 Original Caption: Near the market of the White Pagoda in Beijing, youngsters learn a lesson from the poster: “When your classes are finished, you run to your home. But Mama will not be there, for she has gone to school.” The poster also urges the founding of secondary schools for those who cannot read, in order “to sweep away Illiteracy.” The walls of city and country buildings are covered with educational and political posters, each with its lessons, each with its slogan. 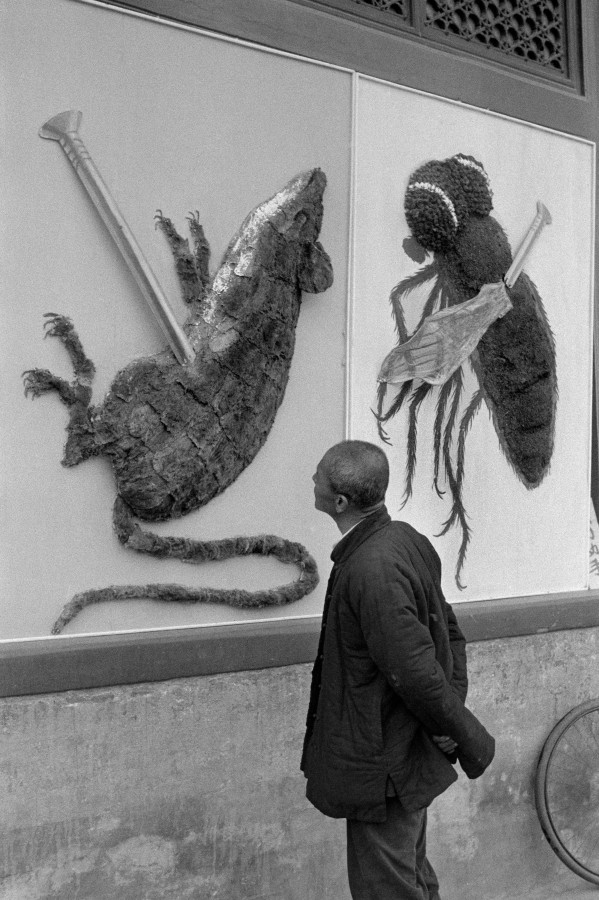 Original Caption: The extermination of China’s four scourges—flies, mosquitoes, rats, and sparrows—is the theme of this exposition in Beijing’s Jingshan Park at the foot of the Coal Hill. To render a realistic effect, the displays are made of rat skins and sparrow feathers. Other displays featured planes, tanks, and torpedo boats made from the equivalent of forty-eight wagonloads of skins and feathers. 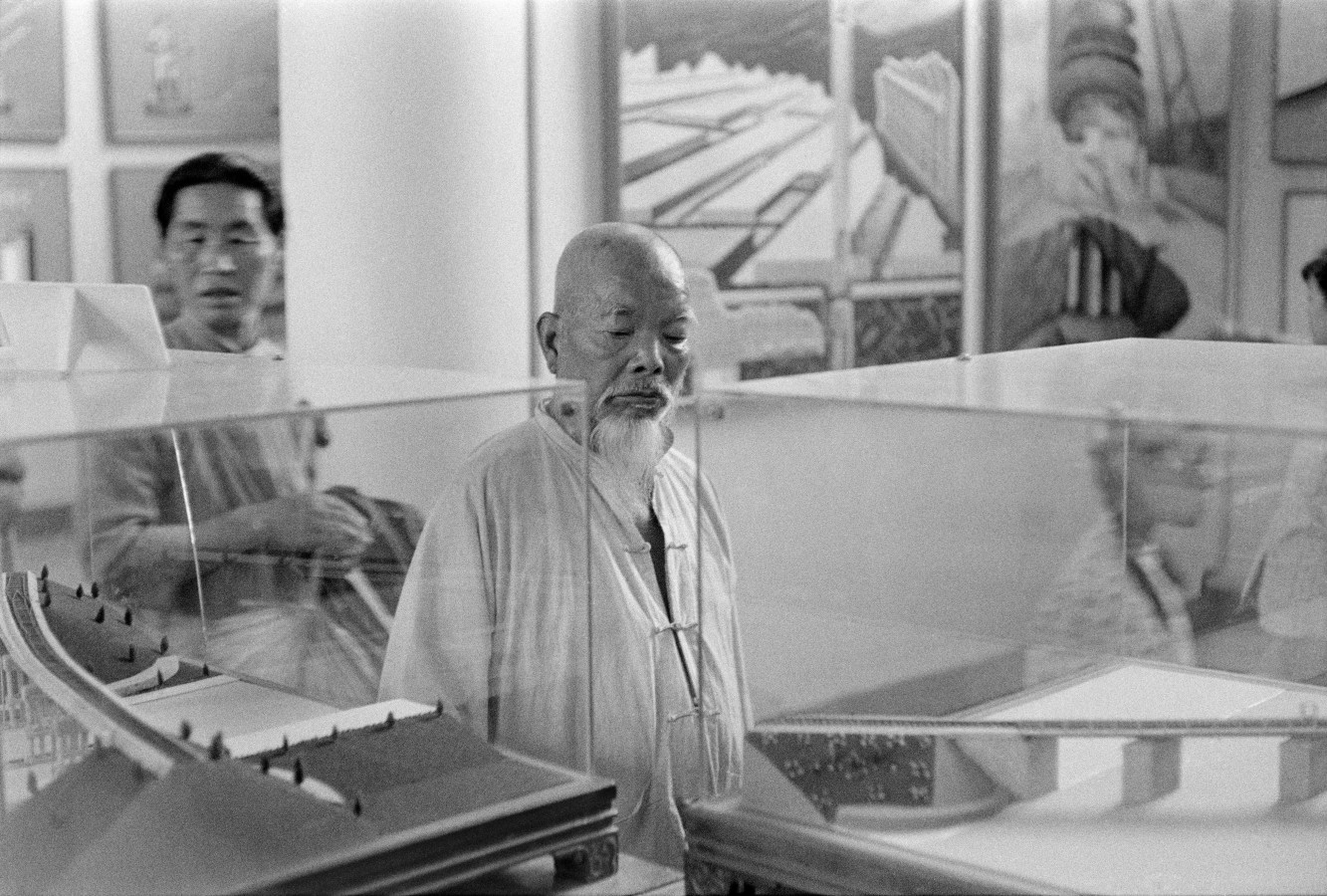 Original Caption: A visage out of old China comes to Beijing’s Bridges and Railways Exposition in the Park of Culture to learn about advances made since the “Liberation.” 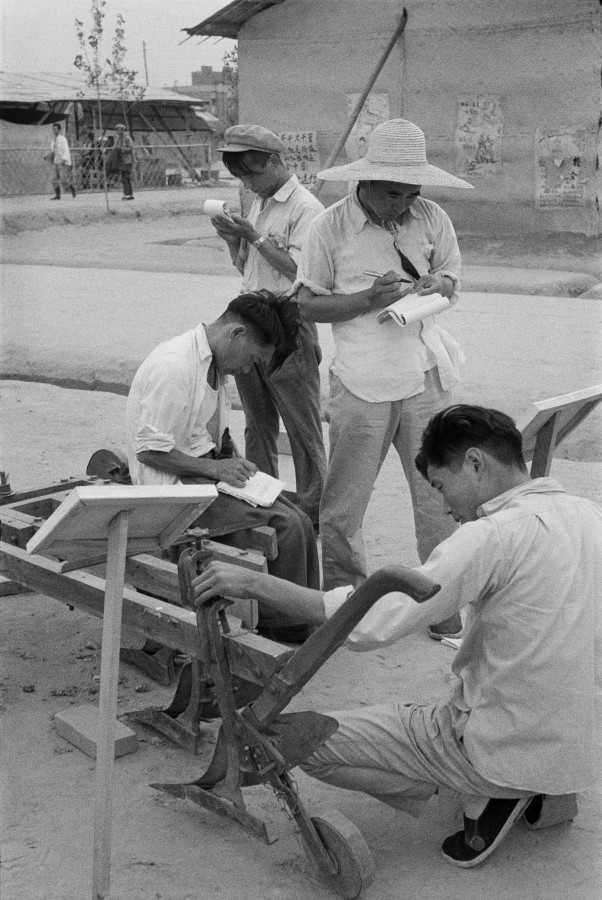 Original Caption: Visitors busily take notes on a peasant invention at the National Farm Implements Exposition outside Beijing. Of the four-hundred-odd exhibits, aside from some heavy machinery from England, Poland, Czechoslovakia, and the USSR, the items on display were the fruit of peasant ingenuity, born of years of having to “make do” or to adapt standard equipment to local problems. This sort of invention is encouraged by the government as a way of mobilizing the masses. Other inventions included a wooden machine, operated by a pedal, that performs eight different operations: cutting grass, threshing wheat, etc. 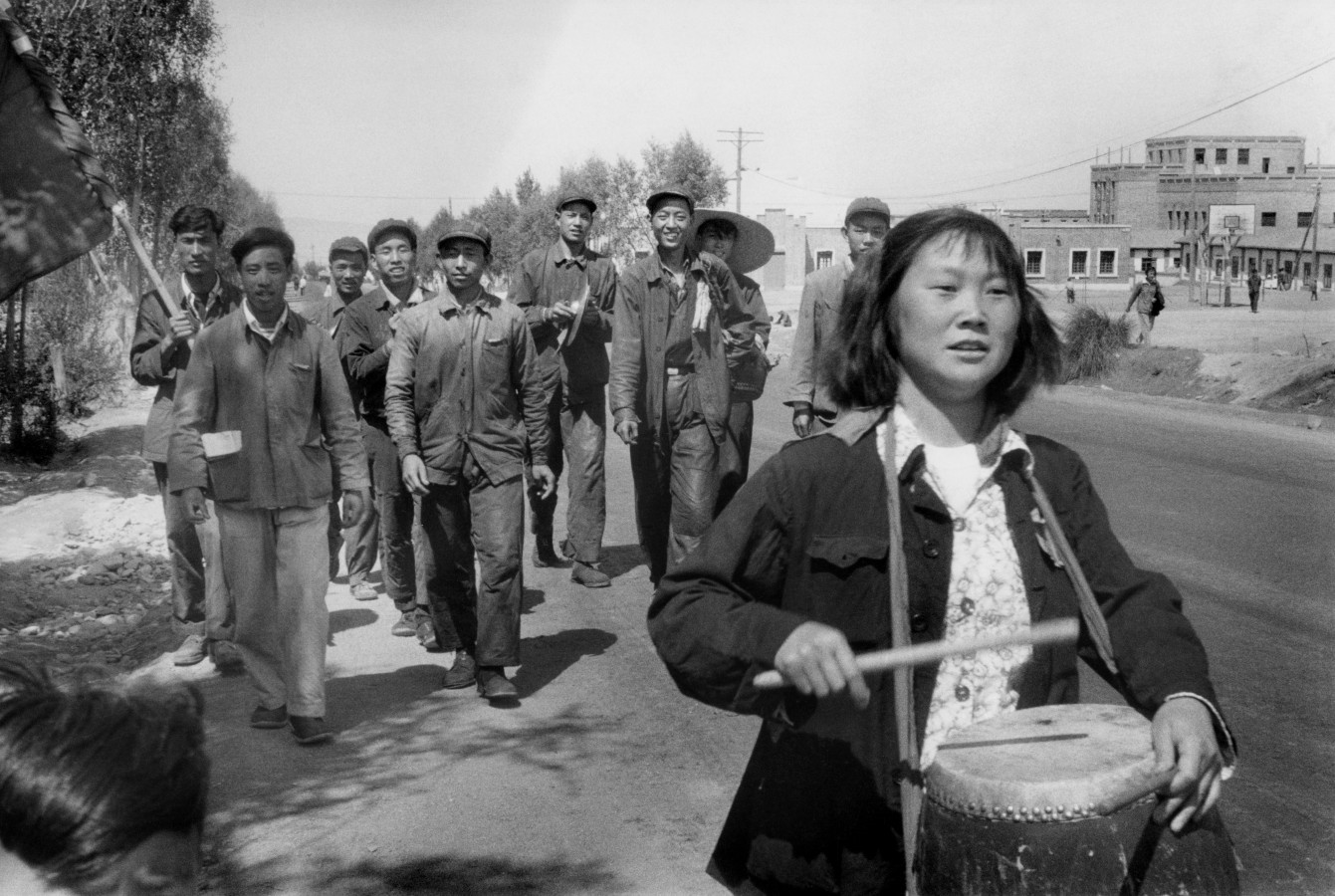 Original Caption: Whatever the city, whatever the region, the sound of drums and cymbals announces a delegation of workers marching to administration headquarters to tell of a new peak of production. These are oil workers from the Petrol Combine of Yumen, an oil center in the Gobi Desert whose production has jumped 200 percent in the past ten years. 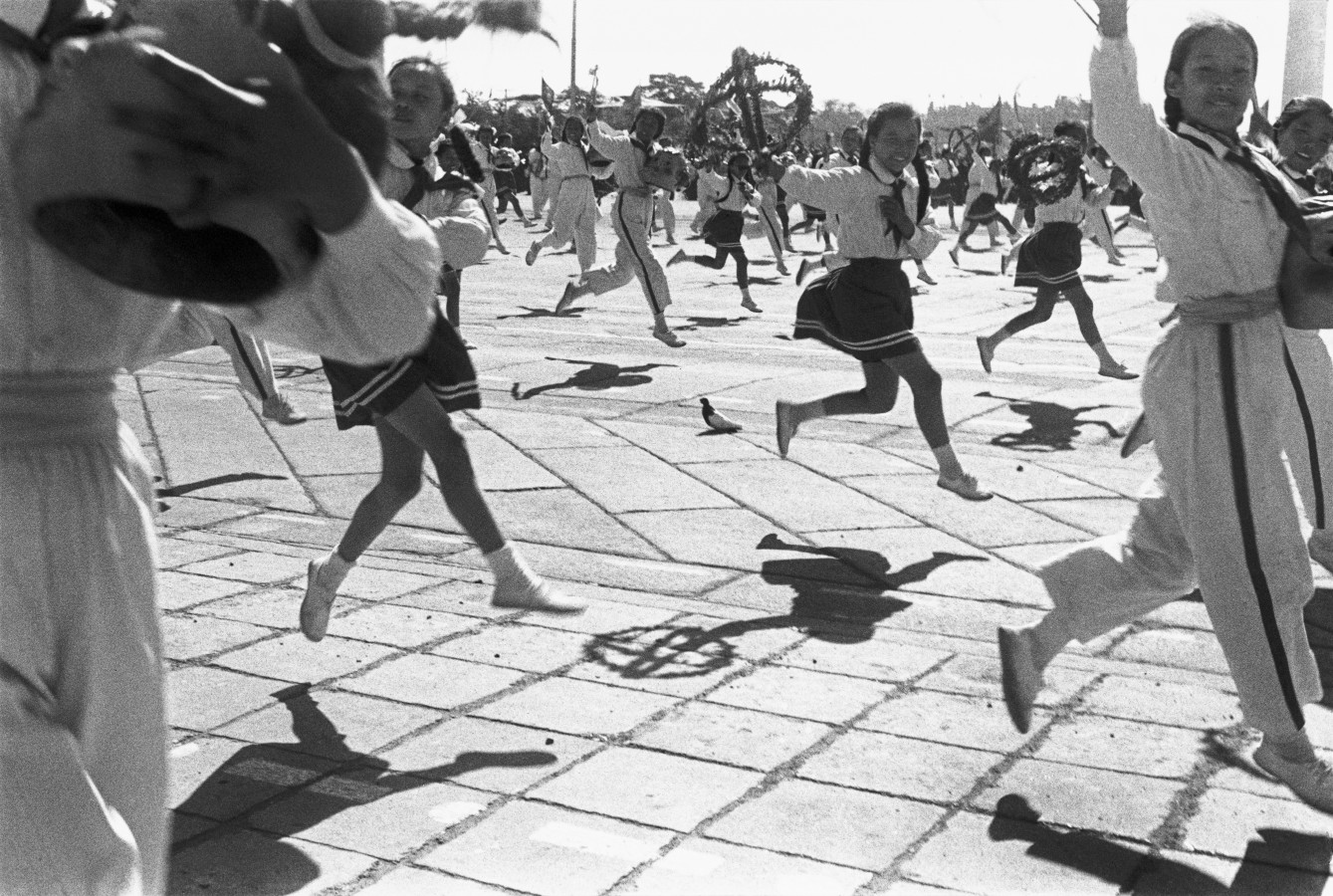 Original Caption: At the celebrations of the People’s Republic’s ninth anniversary, first came the military display, followed by civilians. Athletes concluded the parade. As these young girls danced by, doves were released into the sky, but one stubborn bird refused to fly away. 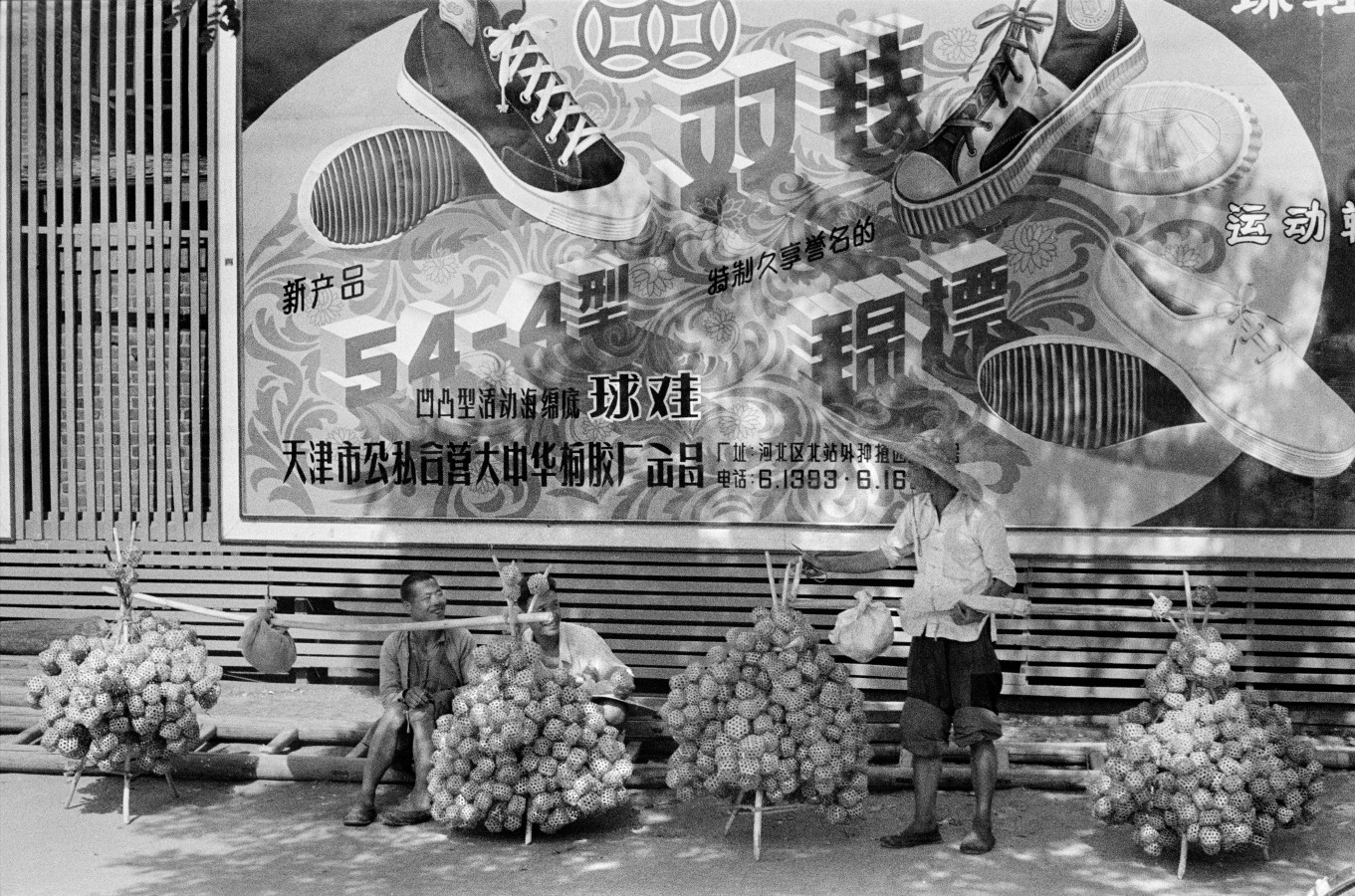 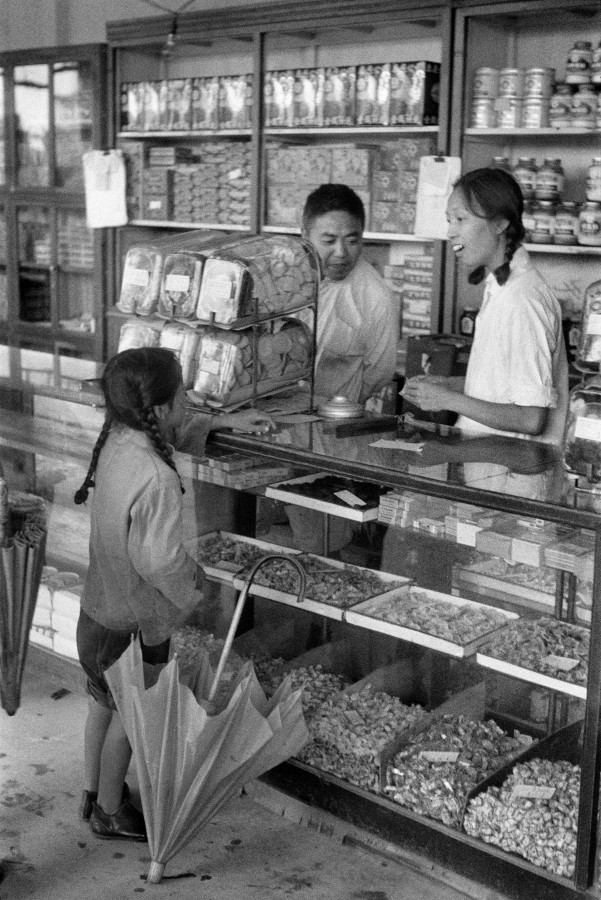 Original Caption: General store in Tsao Yang, one of the newly built suburbs of Shanghai. The population of this suburb has “leaped ahead,” along with the accelerated production of Shanghai, having increased by seven thousand families since its birth. 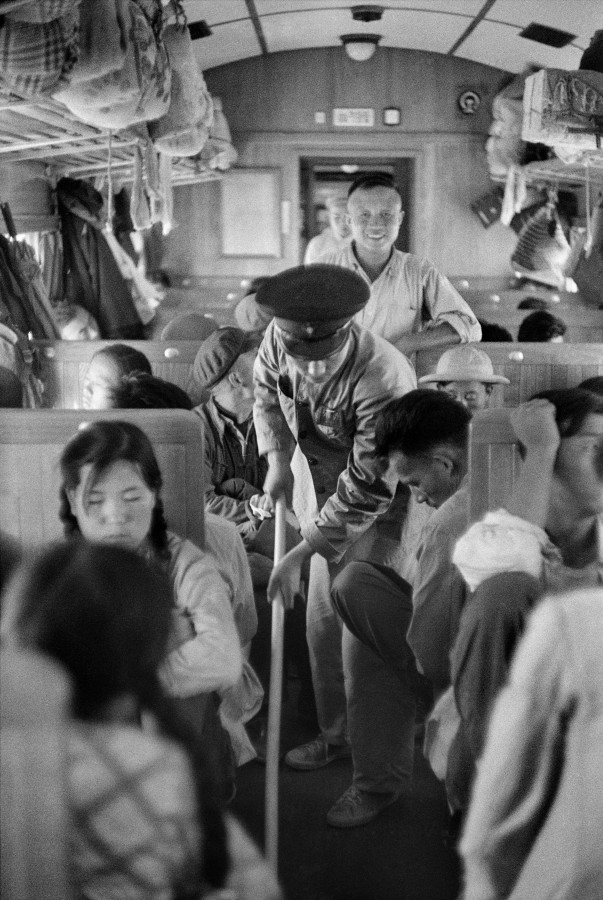 Original Caption: A trip on a train is both a lesson in hygiene and a busy parade of railway employees. Every half hour, someone brandishes a rice straw broom under all feet. This is followed by the ballet of the tea ceremony. One employee distributes the cups, another the tea leaves, a third pours boiling water over the leaves. Meanwhile, the constant blare of the loudspeaker serves up the ever-present lessons in hygiene, or the latest agricultural techniques, or patriotic songs, and so forth. 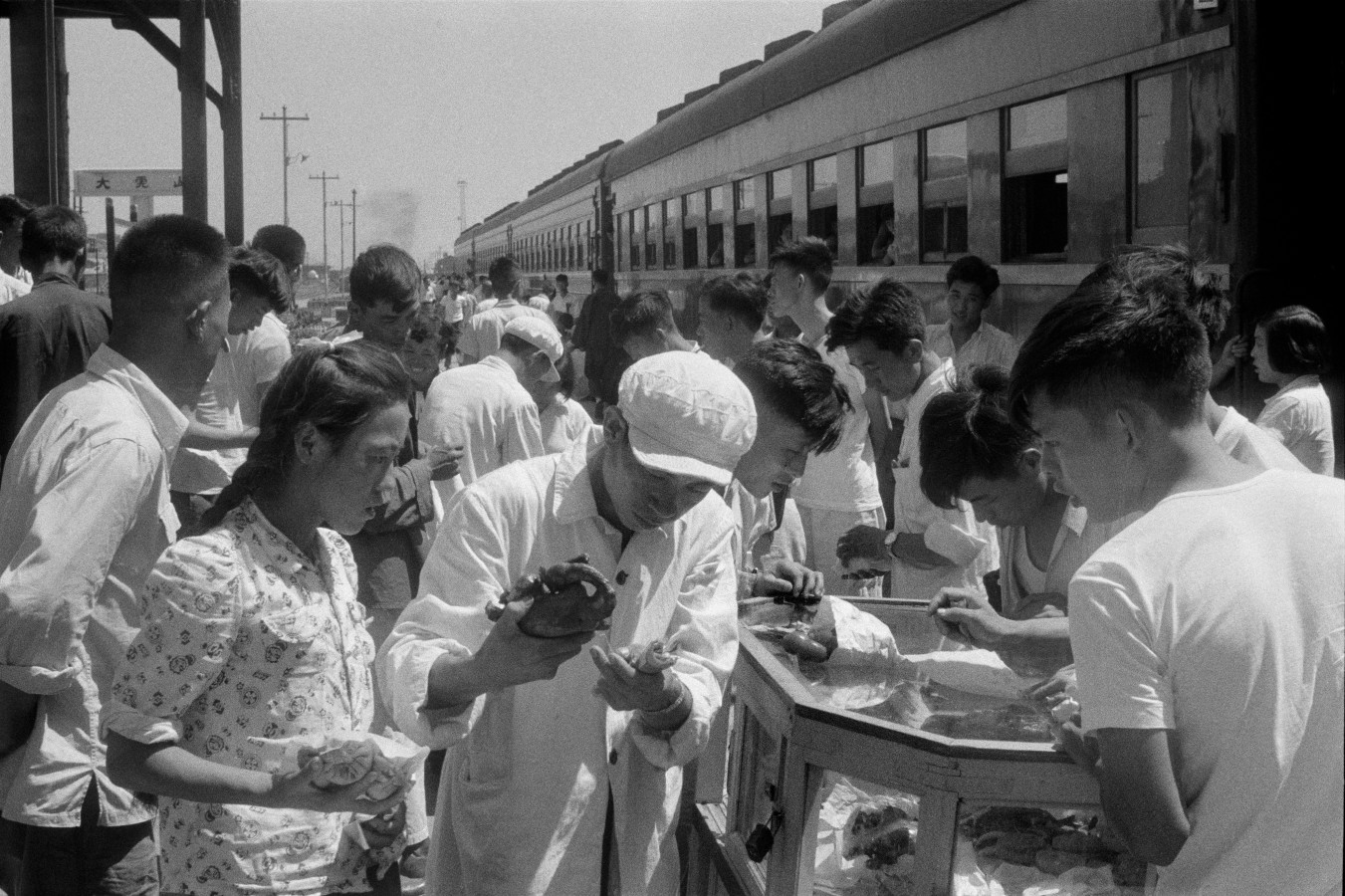 Original Caption: Dinner on the car between Beijing and Shenyang costs between half a yuan and 1.20 yuan (about 70 cents), so many buy a snack from platform vendors. This one sells chicken, another noodles. 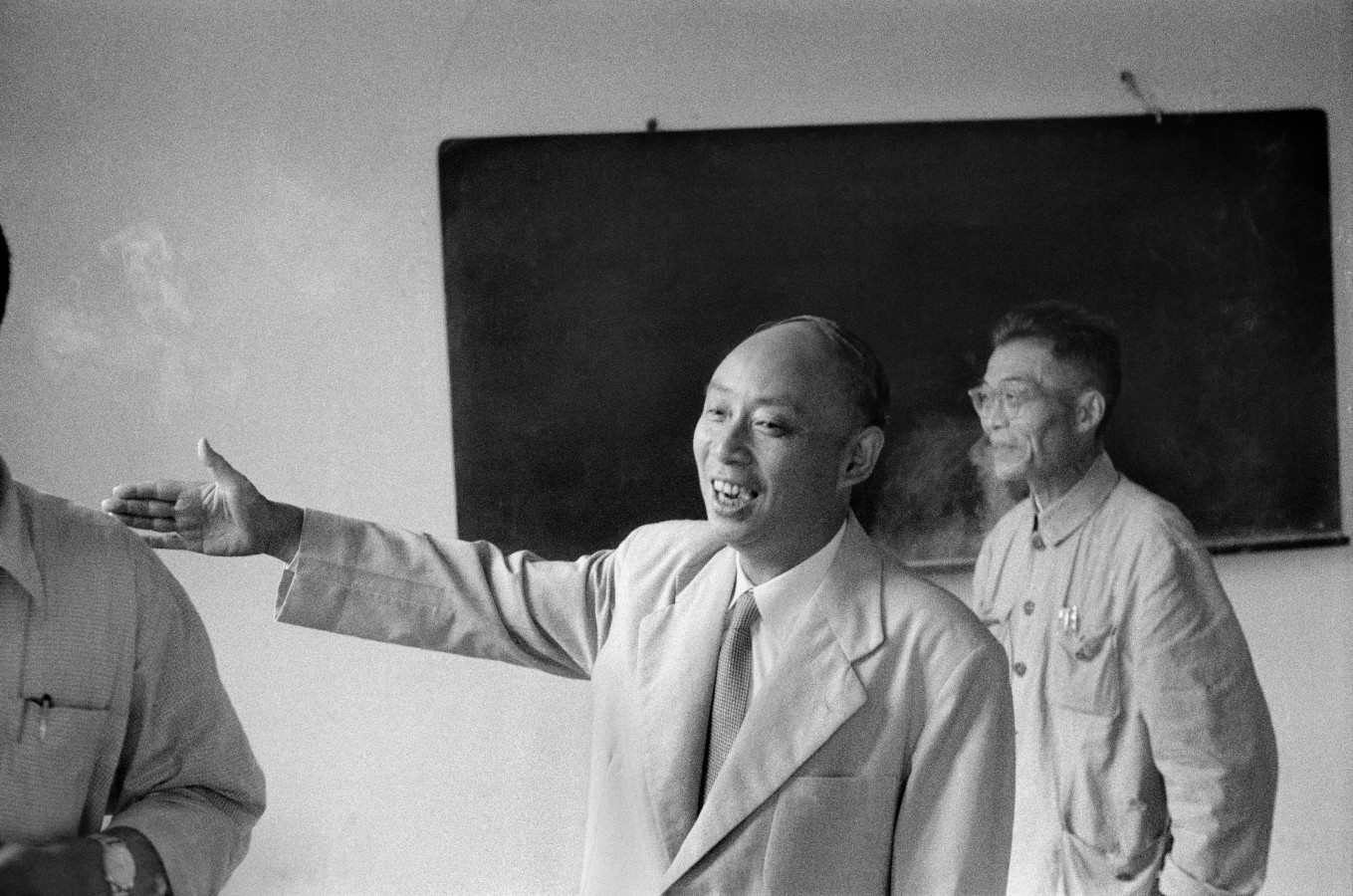 Original Caption: Liu Ching-Chich, capitalist. He is general manager of five cotton factories, three of which are in Shanghai. Financial benefits: 85 percent of the capital is his, 15 percent belongs to the State. Monthly salary: 670 yuan ($270)—about double that earned by a president or provincial governor. Interest on capital: 5 percent, amounting to 200,000 yuan ($81,300) per year until 1962. He says, “Before, I was the Director General. I still am, but with the difference that in the past I appointed myself; now I am appointed by the government. I have been in the textile industry for thirty-nine years. In 1949, before the Liberation, I went to Hong Kong with a million U.S. dollars and my friend Chiang urged me to establish a factory there.  Instead, I handed over the money when I came back, whereas my friend Chiang went bankrupt after several years. Now he is back in Shanghai. 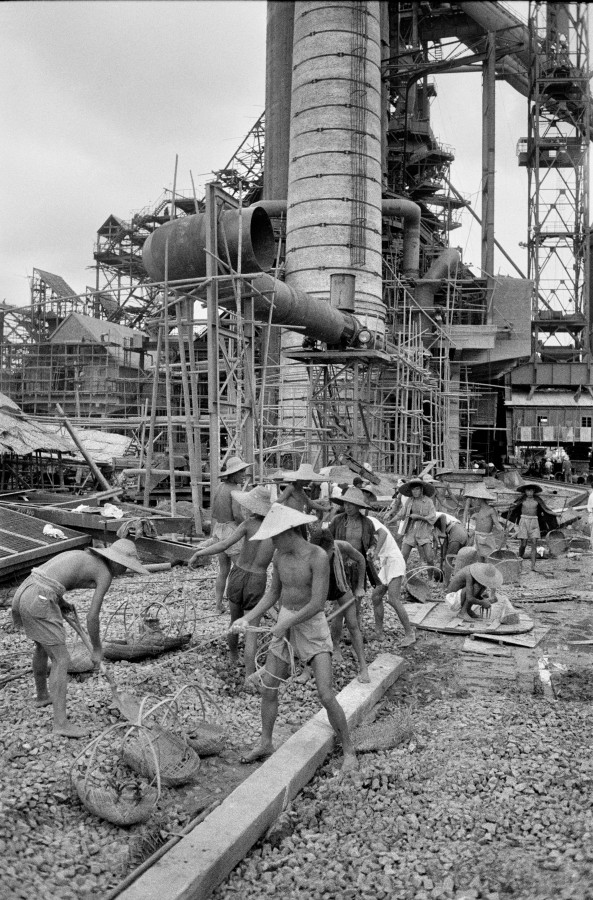 Original Caption: Workers enlarging a steel mill in Wuhan finish an automated blast furnace with the aid of baskets—the centuries-old technique of Chinese coolies. The country is still short of heavy machinery for construction but takes full advantage of its greatest asset: man power. With that asset, Mao Tse-tung may be able to achieve his 1958 quota of 10,700,000 tons of steel, twice the production of 1957.
Tags: История, Китай
Subscribe

Recent Posts from This Journal